Return to list
Date(s):
19 March
Organiser:
Bill Morrison
Contact Bill by email
Accomodation:
The area and details of the meet
(log in to member's area for restricted information such as mobile numbers) 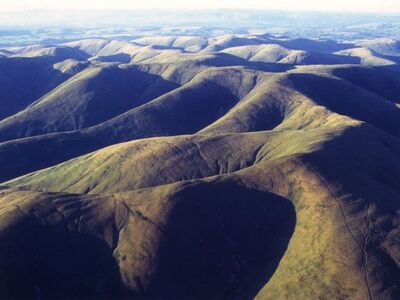 The Howgill Fells lie south of Tebay, nestling between the Lake District and the Yorkshire Dales.  They are a series of high rounded and rolling moorland hills broken up by steep river valleys.  Much of the fells are covered with grassland with small stretches of heather and heath. These are fine, almost deserted hills offering good walking with a real feeling of wilderness.  If we get clear skies, the views from the top are far reaching in all directions.

The Calf and Yarlside are both Marilyns.  The others qualify as Nuttalls.

We’ll start at the Cross Keys Temperance Inn on the A683, about 5 miles past the town of Sedbergh.  The postcode is LA10 5NE.  There is roadside parking on the left just past the Inn (coming from Sedbergh).  Spaces are limited.  Meet at 8.00am – so an early start.

Our route starts by crossing the River Rawthey and then leads us eastwards along a glacial valley before climbing up past Cautley Spout waterfall (England's highest cascade waterfall above ground).  This is a steep ascent but the path is quite good and stepped in places.  We will reach the Calf plateau by taking the path along the edge of the Cautley Crags.

Turning east we make for Caulders, the first of our six fell tops.  From there we turn north to the Calf itself, the highest point in the Howgills.  After this we head north east first to Bush Howe and then onto Fell Head at about 8km from the start point.  Next we go northward along the ridge to reach Simons Seat.  This will take into the the centre of the Howgills.

From Simons Seat (587m) it is a steep descent east of around 250m down to the Langdale Valley.  After crossing the beck we have a steep climb (250m) up onto Hazelgill Knott.  Continuing east we descend into the Bowderdale Valley, cross the Bowderdale Beck and ascend up the shoulder of Yarlside to the summit.  From here we turn north east and walk over Kensgrift before moving up onto Randygill Top, the last of our six tops.  From here we descend via Stockless Top, following the beck off the fells and returning to the cars.

Total distance for the day is around 21km with about 1400m ascent in total.  Much of the terrain undulates; the big ascents are climbing up onto the Calf plateau at the start and the accents of Hazelgill Knot, Yarlside and Randygill Top in the last section. So then, a fairly big day out.